This is very much related to the PyTorch guide on deployment with Flask. Here, I show an alternative using Django, which is not as light-weight but contains more features built-in than Flask. For more information on differences between Django and Flask, see this website.

Note that my deployed app may take several seconds to load because I use Heroku's fee dynos, which automatically power off when they are unused.

To verify, that there are no errors yet, start the Django dev server: 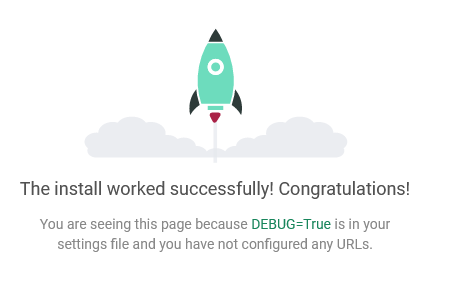 To classify uploaded images, I use a DenseNet neural network that is pretrained on the ImageNet dataset. Since the web app is very simple and does not have any other functionality, I simply implement the image classification inside the Django image_classification/views.py module.

Note: This code is taken from a PyTorch tutorial and is under MIT license.

First, I load the pretrained DenseNet, switch to evaluation/inference mode (since I do not need any further training), and load the mapping for predicted indices to human-readable labels for ImageNet. The JSON-file containing the mapping is available here and should be saved in the Django static directory under as defined in STATICFILES_DIRS (settings.py).

Important: It is important to load the pretrained model once as global variable and not inside the view function, which would reload the model on each request (expensive and slow!).
Tip: Loading the static JSON file via settings.STATIC_ROOT should work both in development and production deployment but requires running python manage.py collectstatic first.

Then, I need a function to transform an uploaded image (passed in bytes) into the required format for DenseNet, which is a 224 x 224 image with 3 RGB channels. The following code does this transformation and also normalizes the image, returning the corresponding tensor:

Finally, this function can be used inside the prediction function, where the transformed tensor of the uploaded image is passed through the pretrained DenseNet model in a forward pass. Since I only do inference here not training, I do not need a backward pass for backpropagation. The model predicts the index of the corresponding ImageNet class, which is just an integer. To display a more useful label, I retrieve the corresponding human-readable label from the imagenet_mapping dict that I created at the beginning from the downloaded JSON file:

When visiting the main page of the web app, the requests are now directed to an index view, which I need to implement next and which will make use of the previous PyTorch classification logic. Before, I still need link these URLs to the project's URLs in pytorch_django/urls.py such that they become effective:

Now, I implement the index view, which accepts an uploaded image, processes it, and passes it to the PyTorch classification logic implemented above. I also need a simple Django template to render the web interface, where users can upload an image and submit it for classification. After classification, the template needs to show the predicted label.

For submitting uploaded images, I use a very simply Django form with an ImageField in image_classification/forms.py:

I use this form inside my index view to accept uploaded images. (index is how I called it in my image_classification/urls.py but it could be any other name.) Here, I just want to display the uploaded image and pass it to the PyTorch model for classification. I do not want to (even temporarily) store it to the file system/disk. Hence, inside the view (image_classification/views.py), I get the image from the form, get its byte representation (for PyTorch) and create an image URI for displaying the image in the template later (see StackOverflow):

The index view above calls Django's render function on a template image_classification/index.html, which I need to create now (inside the image_classification/templates directory). The template needs to show the form for uploading images and, after submitting and image, the uploaded image and its predicted label.

The uploaded image uses the saved and passed image URI from before and does not save or load any image from disk, which is important for privacy.

This template relies on some Bootstrap styling (see my corresponding blog post), but it is of course possible to omit that.

Running the app locally should now work without errors and show a simple page with the image upload form:

After uploading an image, the app shows the image and its classification below: 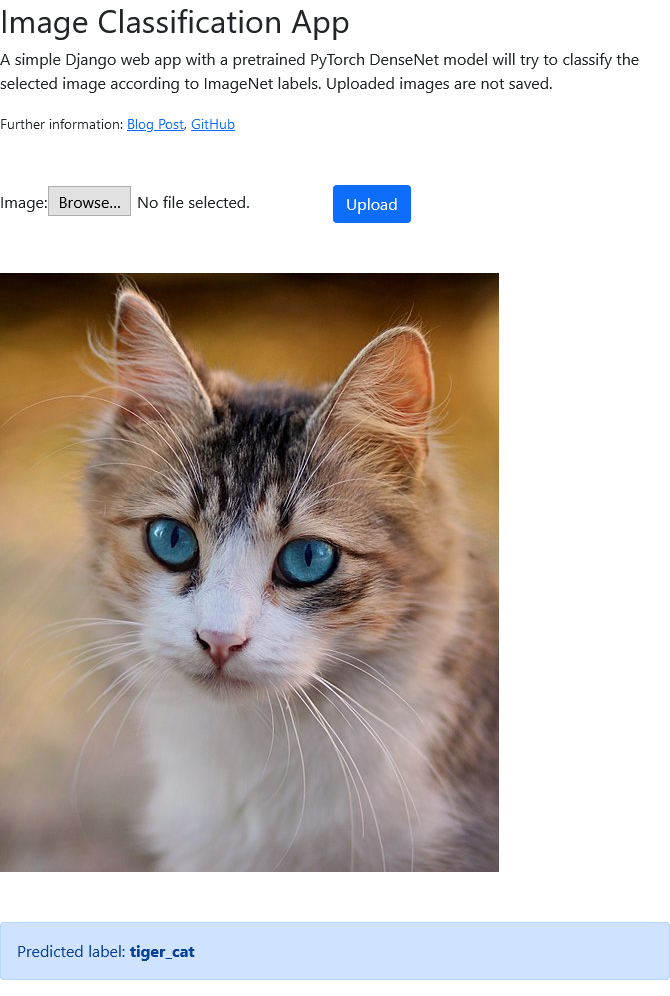 Here, it correctly classifies the image as a (tiger) cat.

For (production) deployment of this simple web app on Heroku, a few extra steps are necessary. Also refer to my dedicated blog post on this topic for details.

For some reason, the default directory structure always breaks my Heroku deployment. It works, when removing the parent pytorch_django directory like this:

After creating the app on Heroku and enabling automatic deploys from the corresponding GitHub repo, set the following config variables (in Heroku: Settings > Config Vars):

This indicates that Heroku should use a separate prod_settings.py rather than the settings.py used for development. This prod_settings.py simply overwrites and disables debug mode, sets the production secret key, and allowed hosts. It also makes use of the django_heroku package for further settings.

Also, add a Procfile in the project root that indicates how to prepare the release and deployment on Heroku using gunicorn:

The paths depend on the project name and directory structure.

For deployment on Heroku, it's important to use the CPU version of PyTorch since the slug size is otherwise too large (above 500 MB), which leads to a build error (see StackOverflow). The free Herku dynos only support CPU anyways.

For production, use whitenoise as described here. Make sure to add the staticfiles directory to GitHub as it will not be created automatically by Django.

The STATIC_ROOT is used inside views.py (see above) to load the JSON file for mapping. To copy all static files from their STATICFILES_DIRS to STATIC_ROOT, run

This is only required once locally. Heroku executes it on each deploy automatically.

Check the Heroku activity/logs to see if the build and deployment are successful. After successful deployment, access the app at its URL. Mine is at https://pytorch-django.herokuapp.com/.